When the MRI Lies

Magnetic resonance imaging is the single greatest advancement in the diagnosis of spinal pathology since the introduction of x-ray by Wilhelm Röntgen in 1895.6 MRI provides the clinician with a precise picture of the pathologic anatomy of the spine.2,4,5,7 The technique has been maligned because of its lack of specificity particularly in patients over 60 where up to a 57% false-positive rate has been reported.1 This should not come as a surprise since we have known for years that the clinical symptoms of acute disc herniation and spinal stenosis can be transient leaving the patient with a demonstrable pathologic lesion asymptomatic.3 It is up to the clinician, not the radiologist, nor the MRI scanner, to decide whether the anatomic lesion discovered by the test is clinically significant.1,8

Over reliance on the test alone can lead to an erroneous conclusion, a mistaken diagnosis, and an unhappy patient. The following case illustrates this point.

M.D. is a 45-year old controller for BART who has been disabled for l-l/2 years with a chief complaint of low back pain radiating to the left leg, top of the foot, and great toe. Since l982 the patient has had low back pain effectively managed by chiropractic manipulation. Two years ago the pain intensified. He was given four caudal steroid injections, medication, hypnosis, TENS units, acupuncture, and eventually had a two-level microscopic diskectomy. The procedure failed to remove all the extruded fragments and the operation was repeated l0 months later. He felt better for one month when the pain increased to the point that he had to use a cane because of a slapping sensation he noted with his left foot. The dorsum of his left foot became entirely numb, and he was unable to walk one block, stand l0 minutes, sit for 20 minutes, or sleep because of left leg pain. He was forced to take four Vicodin tablets per day. An MRI scan was done and revealed "scar tissue enhanced with gadolinium, no evidence for recurrent disc herniation." (fig.1, fig.2)

He was told nothing could be done and his insurance carrier planned on having him declared permanent and stationary, discontinuing his medical treatment.

Physical examination showed tenderness at the L4-5 level. Forward flexion: Hands to thighs. The patient was unable to walk on the heel of his left foot and had decreased sensation to pin on the dorsum of his left foot. The straight leg raising test and bowstring sign on the left produced pain propagating toward the outside of the ankle.

Further testing in the form of myelogram-diskogram-CT scan showed that the material felt to be scar tissue on the gadolinium enhanced MRI was really a sequestered disc fragment responsible for the patient's leg symptoms. (fig. 3)

Removal of the fragment and fusion of the spine was carried out with complete resolution of the leg pain, numbness, and foot drop. (fig. 4, 5, 6)

The MRI is a powerful new tool that creates a precise anatomic image of the spine. This test, like the myelogram and CT scan before it, is not a substitute for a careful history and physical examination. 3,8 The MRI demonstrates the pathologic anatomy. It is up to the clinician to decide whether the abnormality is the cause of the patient's symptoms or not.

Despite two microscopic diskectomies which failed to adequately expose and remove the herniated disc over an l8-month period, this patient had unequivocal signs and symptoms of a herniated disc at L4-5. Severe leg pain which radiates to the outside of the ankle with numbness on the top of the foot and great toe, and a foot drop are highly suggestive of a disc extrusion at L4-5 with L5 root entrapment. The positive straight leg raise and bowstring sign are also suggestive of a mass effect on the dural sac and L5 root, and not of scar tissue (fig. 2). The speckling and enhancement with gadolinium seen on the MRI scan which theoretically should not occur with an extruded disc fragment caused the radiologist to make the erroneous diagnosis of scar tissue. In the setting of prior surgery, such reports should be carefully scrutinized by the clinician who should also review the study firsthand. In this case, scar tissue which grew around the fragment led to the misdiagnosis. The clinical signs and symptoms in this instance led to the myelogram, diskogram and CT scan. Injection of the L4-5 disc caused severe leg pain which corresponded to the patient's complaint. Subsequent CT scan showed the sequestered fragment which later was confirmed at surgery. (fig. 3, 4) 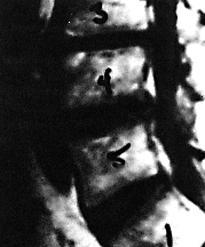 Figure 1.
Sagittal T1 weighted image. Cerebrospinal fluid appears dark as does a degenerative disc, a recurrent disc herniation, or scar tissue, making the diagnosis difficult. This scan was interpreted as normal by the radiologist. 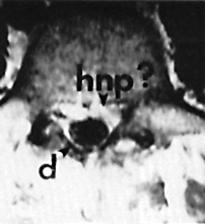 Figure 2.
Axial image at the level of the pedicle enhanced with gadolinium. Note aural sac (d). Arrowhead > points to soft tissue, "speckled" and enhanced by gadolinium. Is this scar tissue? or recurrent disc herniation? This was erroneously interpreted as scar tissue because of "the speckled appearance"and "bright signal". 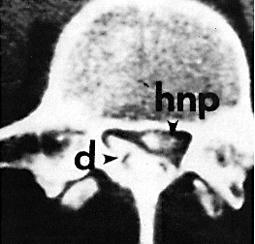 Figure 3.
"Myelo-disco-CT", at the same spinal level as the MRI. Dye injected into the aural sac (d). Dye also injected into disk which reproduced left leg pain radiating to the outside of ankle. Dye is absorbed by sequestered (hnp) > and shows fragment erroneously diagnosed as scar tissue by gadolinium enhanced MRI scan. 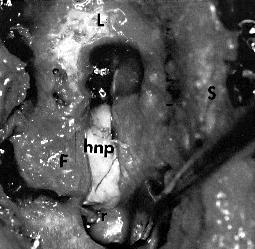 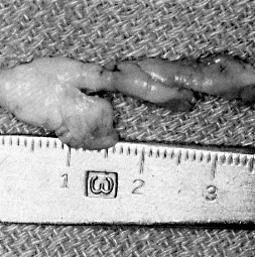 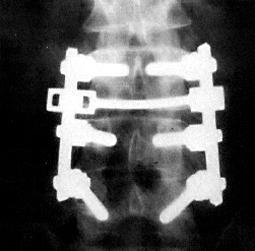 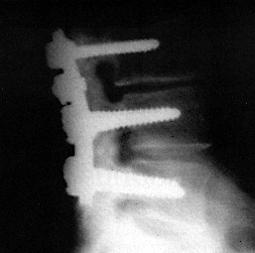 Figures 6 and 7.
AP and lateral postoperative x-ray. Removal of recurrent L4-5 disc is treated with fusion of the spine and fixed with intrapedicular screws and TSRH rods and cross link to prevent third recurrence and symptomatic mechanical back pain which commonly follows excision of recurrent disc.

Office Hours
Get in touch